To live your truth and let others live theirs

To be inspired by the authenticity of our existence

To be welcoming, to be accepting, to be loving...

We welcome you and all to our show

One half shines with golden yellow color like champeya flower and other half shines grey of karpura. One side of the head is adorned with a beautiful braided decoration and other sports an unkempt jatamakutam. I bow to Shivaiiy and Shiva in the form of ardhanarishvara.

Ardhnarishvara is a combination of three words `Ardha`, `Nari` and `Ishwara` means `half`, `woman` and `lord` respectively, which when combined means the lord whose half is woman. Ardhanarishwara in iconography is depicted as half-male and half-female, split down the middle, composite of Shiva and Shakti together in one body.

This form reminds us that God is beyond gender, yet encompasses both genders. God is beyond the concept of any sex. God can be male, female, and even neuter too.

Ardhanarishvara signifies "totality that lies beyond duality", that God is beyond the classification of male and female. It unifies all the dichotomies of Universe. It represents two conflicting ways of life which are needed for life to be created. Therefore, none can exist without the other.

The Ardhanarishwara Stotram was composed by Sri Adi Shankara Bhagavatpada.

Colin Mascarenhas, disciple of Guru Ankur Ballal and Smt. Guru Jhelum Paranjape, has been learning Odissi for the past 10 years. Odissi is an Indian classical dance form from the eastern coast of India that origins from the temples of Orissa.
Colin started his learning under Smitalay - an institute in Mumbai that was started by Guru Jhelum Paranjape under the name of veteran actress Smita Patil. He has performed with their group at various reputed venues that include festivals at NCPA Mumbai, the Akhil Bharatiya Sanskrutik Sangh Pune and the Natyanjali Festival Mumbai. Also been part of their various dance productions like Lilavati, Samudramanthan, Uma and Savitri Vadatey.
Colin moved to Chicago and continued learning Odissi under the guidance of Guru Ipsita Sathpathy and Guru Vishnu Tattva Das and performed at the Shivoham festival and summer festivals at the Balaji Temple Aurora and the fine arts building Chicago.
From childhood, dancing has been his passion and learnt various folk dances of India and taken a few lessons in Kathak and Bollywood dance.

Presented By: Sonal Aggarwal
Sonal Aggarwal is a world traveling performer. Raised in the southwest suburbs of Chicago, she left the country after college to travel the world. In March of 2015 while living in India as an artist and emcee, her life took a dramatic turn with a motorcycle accident that led her back to Chicago. During her rehabilitation, she realized that she was meant to do stand up comedy. Now, as a multi-disciplinary artist, her infectious energy is on stage all over Chicago and soon, the world.

According to the ancient mythology and hindu religious texts the blue colored man Lord Vishnu  is the protector of the universe and living beings. He has taken many forms as incarnation for the fulfillment of his deeds.

Among those Mohini Avatar, an enchantress one of the most beautiful and challenging incarnations he has taken in order to wipe out the evil and uplift the dharma, that is not all as Lord Shiva fell in love in his beauty, as a result Vishnu gave birth to the powerful God named Ayyappa. This is very special  for any LGBT community members as it is the origin of transgender women in South Asia. The classical dance of Kerala state of South India named as Mohiniyattam literally means the dance of the enchantress.

Laksha a transsexual woman presents Mohiniyattom to portray the Devine grace of Vishnu through her creative blend of mythology and reality.

Born in Venezuela, Pekky arrived in United States 20 years ago.  She is a social worker, aspiring writer and part-time activist. She came out as a bisexual five years ago and dreams of visiting India, pakistan, bangladesh, Sri Lanka and Nepal somtime before she dies, to see the countries where a good quanitity of people she loves have their roots.  Pekky has spoken in several open mics including Sappho’s Salon and the Bi Open Mic.

A world popular South Indian classical dance form.  One of the special aspects of  Bharatanatyam is its extensive adaptability and creative deliverance relevant to the theme or every audience.

When it comes to transsexual people, the  term “Ompothu” in Tamil (No:9) has been used for centuries against transsexuals  as a discriminatory or derogatory term.

The saddest thing about some people is that they  still don’t realize the real definition of their actions when they just enjoy to hurt or discriminate the sexual  minorities by addressing them with such terms like “9” just by imitating others.

Laksha is going to reveal the truth behind the numbers and personalities through her Bharatanatyam piece.

Laksha Dantran is an artist with a powerful vision. Rooted in the forms of Bharatanatyam, Kuchupudi and theatre, Laksha believes in using her artistic creations to enlighten and move audiences into action—to find the humanity and essential value of communities of all abilities and experiences. Laksha has produced original theatre works that feature LGBTQ perspectives, with a focus on emboldening her female soul trapped in a transgender identity, and her strength and beauty as a woman. Even as we continue growing as a society or culture, or within our own journeys, Laksha believes “art is still an ocean, the more we approach towards makes us feel we are still just a drop in it.”

Laksha has been dancing for over thirty years, initially training in her home state of Kerala, and later in Chennai. She has received her education and gone on to perform and teach with prestigious arts schools, where she mastered technique and music (vocal percussion and composition), and continues to offer glimpses into these rich methods in her classroom and work. Still, Laksha’s greatest education and inspiration are her experiences, which emerges in her work.

Laksha’s choreography and direction focuses on bringing out the natural expression of her artists; she creates movement that is clear and elegant, effortlessly conveying a mood and story without excessive decorum or abstraction. Often her deep thoughts about universe and its connection to its own various and astonishing creations function as characters embedded in modern reality and the ecosystems of nature, often urging artists to delve into their own experiences to bring truth into their portrayals.

Currently, Laksha is a freelance artist and performs with Mandala South Asian Performing Arts in Chicago, a not for profit arts organization that promotes ancient cultural arts and their modern progressions. Laksha feels connected with artists of Chicago and that it will serve as a platform for her to push forth her work in the United States and international community.

Laksha is an established artist who has toured throughout India, Belgium, Sri Lanka, Malaysia and the United States. Her work has received critical claim: as a performer, curator and director.

Laksha’s intention is that her work is fully realized at a human level. She believes humans in their natural state are trusting, loving, and ready to understand. She is actively pushing structures away to open space for true visibility and realization.

Presented By: Stuti Sharma
Stuti Sharma is an immigrant artist, stand up comic, poet, and educator based in Chicago. She only trust restaurants where the cooks are simultaneously facetiming family. You can catch her around the city doing shows and find her on Twitter at @cyborgstuti. She is currently working on a chapbook and has a spot in BELT Publishing's Chicago Neighborhood Guidebook where through photos she tells some of her story growing up in the West Ridge. 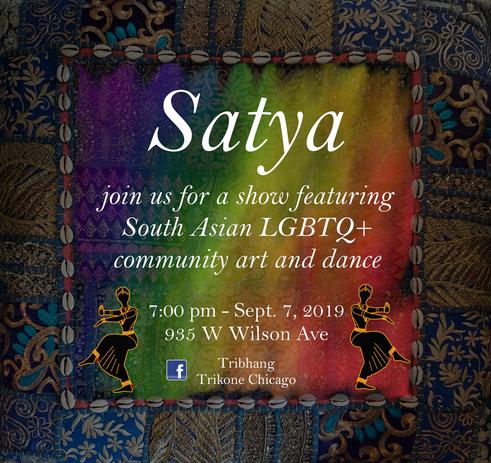 All proceeds from Tribhang's programming from this year will go to support local artists and Trikone.  Please donate!!!